You may have watched a lot of comedy.
But have you really looked at it? 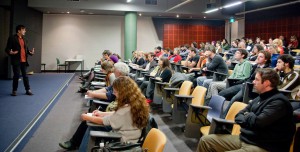 This intensive two-day course shows you the secrets of writing comedy.
International comedy legend Tim Ferguson gives you processes and insights you need to write comedy for standup, television & film.

Beginners or Professionals – Tim’s Revolutionary Comedy Principles work for everyone!

You will learn new ways to write your standup material.
You will be shown how to construct a comedy film or TV show.
You will discover new ways to sell your comedy to producers & networks.

You’ll be writing new comedy before your know it!

WHEN: Weekend of 31st MAY & 1st JUNE (10am to 5pm)
WHERE: Offices of Australian Writers’ Guild, Perth

“The best thing about Tim’s comedy course is that it’s really practical. It’s not like other courses I’ve done where you are left thinking “OK great theory – but how do I make use of that?” Tim makes it very clear how you can apply what you learn to your own comedy writing.”
[Jehan Ratnatunga
Youtube Premium Channels Strategist, USA]

“Learning the inner mechanics of comedy with Tim has provided me with tons of knowledge to draw upon on my journey to writing an award winning movie or TV series.“
Henry Inglis, Screenwriter/Comedian
(Winners of Movie Extra Webfest 2011 for ‘Henry & Aaron’)