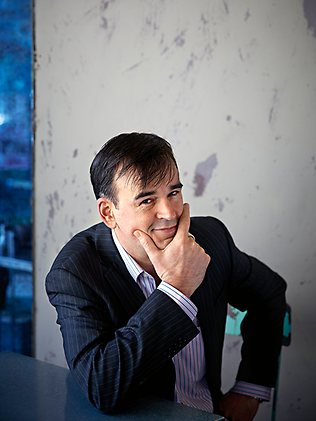 You had phenomenal early success in your comedy career with the Doug Anthony All Stars. What is a foremost memory of those years?
We were doing a gig with U2 at the Hammersmith Odeon in London in 1988 when the gigantic set collapsed. I was nearly killed; Richard Fidler was nearly decapitated; Paul McDermott was nearly crushed to an even smaller package.

Your father Tony died young, at 58, in 1991; you were diagnosed with multiple sclerosis in the mid-1990s; and your younger brother Simon died in 2009. How have you dealt with that succession of blows?
It never gets easier, but I try to find a quiet place for them in my heart. Two great men.

Why did you keep your MS a secret for 15 years, and do you wish you had revealed it earlier?
It was nobody’s damn business! I was handling it, still do. And I worked in TV where executives run screaming, their heads aflame, cowering at the audience. Why give them something else they couldn’t understand? I saved a lot of people needless worry by bearing it for as long as I did. I don’t recommend hiding or releasing it – others have their own paths.

Your new book Carry a Big Stick is about a “fearless life of friendship, laughter and MS”. Are you ever fearful and what does it mean to be fearless?
Perspective is the solution to fear. I have bigger problems than worrying my head could fall off. We all live with the unknown. I’ve built a career in the gap between truth and fact. I mind the gap, but don’t lose sleep over it. Besides, I’m a lucky, lucky bastard.

Can MS ever be a laughing matter?
Humour is the only salve for the ridiculous antics of my brain. I could weep but who would listen? Besides, I was never much of a dancer.

The book had its origins in the show of the same name you wrote with Marc Gracie and performed at the 2012 Melbourne Comedy Festival. Does the audience know whether to laugh or cry?
The show sells out everywhere, which I find disconcerting. Are they coming to see the monkey with a broken wing? Comedy is about creating spontaneous, involuntary emotional responses. The show’s ruthless in that regard. Making people cry is easy; laughter is a killer.

What’s next in your performing career?
We’re taking Carry a Big Stick around the world. And I’m writing a new stand-up show about war, sex and environmentalists. (One of those things is less interesting than the others.)

What do you think about the state of Australian comedy?
I’d like to see more fire and fury. Comedy shouldn’t be easy to watch. It’s about changing beliefs, not confirming them. But, hey, that’s just me. My advice to young comedians starting out is: avoid comedians – they want to screw you or kill you.