If you’re a Beginner, Tim will show you how to get started. If you’re a Professional, you’ll gain new tools to improve your scripts.

“Revelations galore! I’ve written comedy for 20 years, but Tim showed me how comedy really works on the inside.”      [CK Cohen, NYC]

Great comedy is all in the writing.

Tim Ferguson’s revolutionary 4-hour online class gives you the techniques and tools you need to:

Discover simple writing principles that professional comedians use to generate and sharpen their material.

Find new ways to write your own comedy routines that work.

“Taught me more than years of self-study and practice.  Tim’s writing techniques got me from open-mic to doing pro stand-up nights.”
[Richard Lindesay, stand-up UK]

“Tim is like a magician revealing all the tricks. Amazing!” [KJ Mueller, NYC]

Who is the comedy teacher?

Tim is author of ‘The Cheeky Monkey’ Comedy Screenwriting Manual, Co-Writer of feature films ‘Spin Out’ & ‘The BBQ‘ and various books, sitcoms and TV shows.

Many writers struggle with comedy. It can seem an unknowable art. But as Tim says, “Comedy is a craft. It can be learnt and mastered!“ 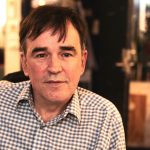 Tim has trained thousands of writers round the globe. Many go on to win international awards and sell their projects.

Gain the tools to get started on your next great comedy idea.
You’ll be writing great comedy before you know it!

You can also book a one-on-one comedy coaching session with Tim.

‘There are Master Classes and Master Classes. Then there is Tim Ferguson’s PhD in Comedy Class. It was just a wonderful five star experience from start to finish – and yes, it is ‘ha-ha’ hilarious.’
– Dr. Patrick Maher, Past Chairman of the WA Writers Guild

‘This course is revolutionary – a whole new way to look at comedy.’
– Leisl Egan, ABC Producer

‘Can’t recommend Tim’s courses enough. I learned so much, and had so much fun, I was keen to do it a second time!’
– Scott Anderson (Screenwriter)

‘It’s like having a doctor explain how to make people laugh. Tim’s insights are essential if you’re serious about comedy.’
– Steve Mitchell, Screenwriter of The Heckler movie