COMEDY WRITING WITHOUT THE TEARS!

Writing Comedy is tough!
Now you can make it easier for yourself.

How to write sitcoms and stand-up comedy

You can start writing comedy straight away.
If you have ideas but don’t know where to start, this book shows you the way.
And if you’ve always wanted to try comedy but worry about failing, you’ll get a solid plan for getting started.

The Cheeky Monkey comedy writing manual is a simple & practical how-to guide.
It shows you the secrets of comedy writing.
Save yourself years of guesswork and embarrassing mistakes!

‘It’s like a Jedi course for comedy, though Tim is a few heads taller than Yoda.’
May Yeung, Screenwriter (UCLA)

‘Tim Ferguson is an absolute comedic genius! His comedy writing class was non stop fun and helped me to become an even better comedy writer. I wrote my first US TV pilot using these principals.‘
Joanne Rose, winner at L.A. Web Fest

“This book is brilliant, I thoroughly enjoyed it! Not only is it very funny, but it also provids a detailed game plan for creating comedy. Not easy, of course, but a wonderful step by step recipe. It helpfully analyses the many reasons WHY we laugh, and offers hope that even a layman can learn to be funny in their own writing.”
(Ed Love, Screenwriter, Director UK)

“This is by far the most awesome book on comedy writing ever written, and I’ve read most of them. I can’t recommend it enough.
I wrote the million-seller comedy videogame: ‘Looney Tunes – Acme Arsenal’, and used loads of the awesome tips, tricks and ideas from Tim’s book. This stuff works!”
(JT Velikovsky Transmedia Writer-Director-Producer & Film Story R.O.I. Guru http://storyality.wordpress.com/)

“It’s already being called ‘Bible’. We won’t be able to live without it!”
(Robert Jones, Producer USA)

To own a copy of The Cheek Monkey go to:
CURRENCY PRESS PUBLISHERS 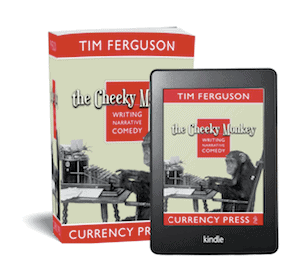 “You don’t need to aspire to write comedy to find this book entertaining and instructive.”
(The Age, Melbourne)