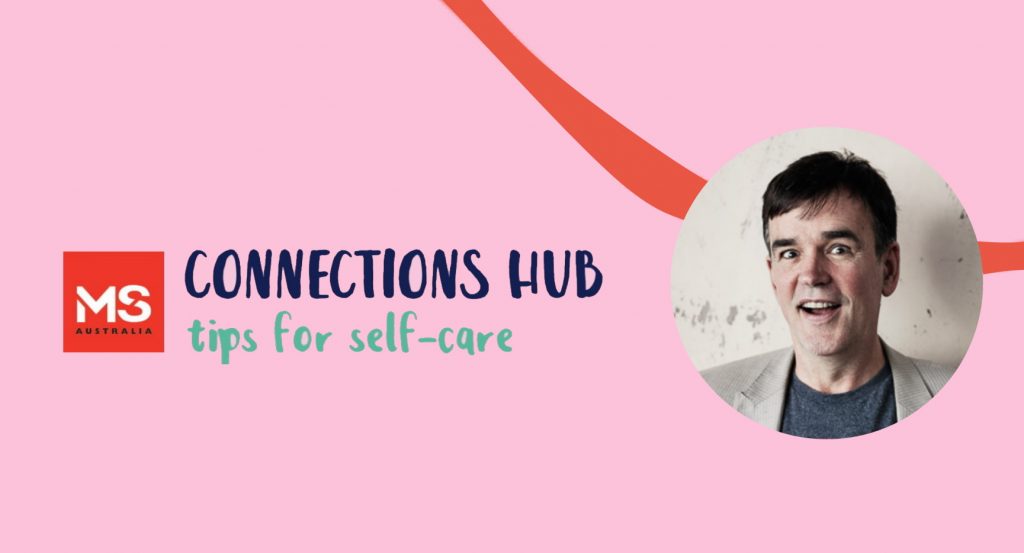 Tim was first diagnosed with multiple sclerosis (MS) aged 32. From the age of 19, Tim had experienced intermittent symptoms, a kind of MS is known as ‘Relapsing/Remitting’. Attacks would temporarily affect his eyes, muscles In his legs, arms and face.

Since 2017, Tim’s condition developed to ‘Secondary Progressive’, presenting an advanced and permanent array of symptoms.

Tim initially kept his condition to himself “because it was nobody’s business and I didn’t want people to freak out”, but by 2013 his mobility was affected and he began using a walking stick. So he spilt the beans on the Australian comedy TV show, GNW.

Tim has written and performed a variety of live shows covering the issue of disability, disability employment and the work of carers. Including his recent shows with the Doug Anthony Allstars, and his trilogy of live comedy show trilogy: Carry a Big Stick, Fast Life on Wheels and Smashing Life (Motivation for Idiots!).

Tim stresses that the decision to share information about your own MS is a matter of personal judgement. If you don’t have visible symptoms there may be no immediate reason to disclose your MS.

MS is an illness of the central nervous system. Worldwide, over 2.8 million people have MS.

MS is caused by the autoimmune system causing damage to myelin – a fatty material that insulates nerves, similar to the tubing around an electric wire. ‘Demyelination’ disrupts electrical impulses to and from the brain.

The good news is many employers will offer support to allow someone to continue working if they understand their needs. Often, any expenses required to adjust a workplace are reimbursed by the government. And most educational institutions can make adjustments to schedules, requirements for entry while respecting your privacy.

MS is highly variable in terms of symptoms, severity and persistence. For more information about MS, check out the MS Australia website. If you’re concerned you are experiencing symptoms associated with neurological illnesses, speak to your doctor.

Tim Ferguson launched the MS Australia Connections Hub to help people with MS connect virtually for World MS Day 2020. The Connections Hub allows people in Australia and across the world to upload and share their tips for self-care.