Many writers try it and give up.
The Comic Principles are a new, simple way to look at the ancient craft of making audiences laugh.
They can be applied to any media or performance.
They cross all cultural boundaries.
They are essentially Human.

The Principles are not rules or formulae. 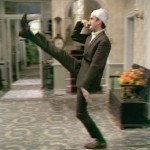 They are used to construct a joke, character or situation, then they are removed, leaving only the Subject Matter arranged in a pattern designed to created spontaneous & involuntary laughter through surprise, anxiety and accepted truth.
Relax, you’ll see what I mean. The list may seem long. But when you sit down to write your comedy, it’ll simplify things for you.
Enjoy!

(self-enclosed one-liners):
Juxtaposition of Incongruities (two things are put together with surprising connections, similarities or associations)
Two Meanings Gags (a the writer plays upon the double or multiple meanings of a phrase, sentence or word)
Malapropisms (a word is use inappropriately due to its similarity [no matter how remote] to another word)
Misinterpretations (inadvertent or deliberate misinterpretations of a word, sentence or action)
Reinterpretations (the revealing of honesty beneath obfuscation)
Obvious (an obvious punchline is applied where a more elaborate punchline was expected. Usually, this tag deals with the premise only, introducing no new elements)
Absurd (a random element is used as if it is appropriate and normal)
Wordplay
Observation (an object, event, ritual or everyday action is either de-constructed, explored with inordinate detail, viewed from an unlikely perspective or given a change of context)
Irony (an intention is denied or negated by the action taken to achieve it, the writer’s godlike hand denies the intention or, in the case of dramatic irony, the actions of characters are undermined by their personal flaw or lack of knowledge)
Sarcasm (declared view is opposite to actual intent)
Self-Referential (a punchline is a negation/confirmation/paradox of the premise)
Flawed Logic
Accepted Truth (not necessarily true, but accepted as true)
Repetition (ad nauseum repetition)

(gags that move a story):

(Over-arching principles that can apply to the above or independently)
Surprise that Accords with Accepted Truth
In/Completeness (a non performance of that which is pretended to be performed, at the same time that a character is giving loud pledges of performance.)
Metaphor (juxtaposing one thing [e.g. event, story] with another to illuminate a truth)
Surprise (the resolution is unexpected but complies with the information given)
Change of Context (placing something in a different context or seeing it from different perspective)
Dramatic Irony
Character Irony
Knowledge Differentials (secrets, misunderstanding, who-knows-what-when)
Inverted Proportion (trivial > important / important < trivial)
Panic & Overreaction
Compression of Drama/Tragedy (incl. extraction of realism from the narrative)
Implication (deliberate or inadvertent)
Bafflement
Heightened Conflict
Absurdity (the confusion of values, perspective, objects, roles, intentions in a juxtaposition situation – or the inappropriate substitution of the random and mundane for the fantastic or everyday)
Exaggeration

That’s enough to practice for now.
You’ll discover hybrids of the above.
Put this list on your whiteboard and make sure your scripts feature one laugh-point every 15 seconds.

Comedy’s hit & miss, trial & error, not a perfect science. But you can make your comedy more reliable!