(Excerpt from ‘Carry A Big Stick’, by Tim Ferguson [published by Hachette])

“The Newbridge population (127 people, rising to 132 with our arrival) included two young hippies, a married couple named Kevin and Shana. As is her way, my mother befriended them, possibly against their will. What choice did a rabidly expressive woman have in a tiny town; and what choice did two open-hearted earth-huggers have in the face of my mother?

Mum would collect my brothers and me from the school bus and take us with her to visit the hippies’ ramshackle house.

When I say ‘hippies’, I don’t mean today’s whining dope-addled dweebs who live in pricey inner-city rentals and protest against everything from capitalism to cut-price laundromats. Kevin and Shana were pure, organically bred, harp-playing, ‘No Abstinence Please, We’re Hippies’ hippies. He was a schoolteacher and she was between reincarnations.

I was just a kid, but I could tell Shana was as naturally beautiful as a goddess before bathtime. Her hair was a loose array of grubby golden ringlets, her eyes were spooky grey, her lips were ruby red but rock-festival rough. She talked about Greek gods as if they were real – ‘Aphrodite sure has made a sunny day for us’.

I was smitten and began reading about the ancient Greeks and their gods. When I was ready, I tried engaging her in conversation about them. I puffed out my peacock brain feathers and asked something beyond my ken, like, ‘Do you think Zeus was a bit harsh on Persephone? I mean, she only ate a handful of pomegranate seeds.’

Shana tilted her head, fiddled with a ringlet and stared into the middle distance. I thought I’d offended her.

I asked if she believed in the Greek gods. She frowned and said, ‘It’s not like it’s a religion or anything.’

I didn’t want to say the wrong thing so I let that slide until I could research more. The next day I raced to the school library and checked. According to the encyclopedia, having gods like Zeus is what religion is all about. She was wrong, but I was determined not to mention it.

The truth was that I had a slam-dunk-snatch-grab teen crush on Shana. She was my Achilles heel, my honey baklava, my pre-bath Harmonia. I would have followed Shana anywhere, but she never seemed to leave the house.

Kevin was a gangly and earnest fellow with the face of a young ginger Gandalf. He wore loose-fitting everything; even his wiry spectacles kept slipping down his wizard’s nose. I wasn’t interested in Kevin.

Their hippy house was more like a hutch. Stone floor, straw-matted ceiling, a hand-pump water tap, a grinder for whatever foods hippies grind. A lone black sheep named Sisyphus lived with them. I hadn’t learned what a metaphor was, but when I was taught the word later Sisyphus was the first thing that came to mind. Sisyphus had the run of the house, and pooped on the stone floor at will. Kevin would cluck at the small piles of brown dingleberries. Sisyphus, he said, had a psychological barrier about obedience. He’d asked local sheep farmers what he could do about the problem. Knowing some of those farmers, I can only imagine their responses ranged between wary squints, flummoxed gawking and pointing to a meat-freezer. ‘We were going to get carpets,’ he said, ‘but Sisyphus resists house training.’

I thought, If the only punishment for pooping on the floor is a cluck from Kevin, I’d resist house-training, too. Meanwhile, Kevin kept scooping up the dingleberries. According to my Greek research, this was entirely Sisyphean.

One day, Kevin greeted us with the joyous news that Shana was pregnant.

Mum cooed, my brothers shrugged, but I nearly fainted in jealous distress.

Pregnant? The blood drained from my head.

My fantasy had been to elope with Shana and take her far away. Somewhere on a mountaintop among clouds filled with Greek gods. Somewhere where the world could never touch us. Somewhere carpeted.

My dreams had been shattered instantly.
‘I’m going to document the pregnancy,’ proclaimed Kevin. ‘A journal, photographs, charcoal sketches.’

And I will stick them down your scrawny neck, I thought.
My mind had once created panoramic visions of Shana’s mud-smudged, naked splendour. Now these were all tainted with Kevin’s ludicrous grinning face jutting in from outside the frame. ‘I’m going to document this dreamscape,’ he’d say.

Over the next nine months, Kevin collected books on pregnancy, birthing and child-rearing. As the books piled higher, my mood sank lower.

When he announced his plans to be at Shana’s side as she gave birth, I took a dim view. What could he provide?

To my young mind, the introduction of men into the birthing process seemed as appropriate as having someone hold your hand at the dentist’s. Maybe if the helper’s role included shouting abuse at the dentist, there was a point in having them there. But Kevin’s plan seemed to include only handholding, mantra-humming and exhorting everyone to relax, especially the baby. Shana said she couldn’t give birth without him. I figured the process was inexorable. Being born was the baby’s department, not Kevin’s. Why not include Sisyphus the sheep?

My loathing of Kevin rose with each encounter. I despised everything he stood for ? vegetarianism, natural fibres, environmental awareness, collective ownership of everything… Kevin said he was a teacher. I scoffed, but really, what kind of teacher could he be? He couldn’t even train a sheep not to poop indoors. And, speaking of Sisyphus, I couldn’t help wonder if the bleating bugger was their first child. Or maybe the imminent baby would turn out to be the son of Sisyphus? The thought of Kevin’s face when Shana pumped out a black lamb gave me wicked pleasure.

Of course, this vengeful fury was frightfully unfair of me. Kevin was only trying his best to make his wife and child happy. He gave the venture everything. He wanted Shana to give birth at home, but the doctor would have none of that. (At that time, home-birthing was regarded as tantamount to home surgery.)

Kevin read and read and read. By the time Kevin and Shana arrived to give birth at the hospital in the nearby town of Blayney, it’s arguable he knew more than the midwife.

He was ready and humming.

Everything seemed to be going well, but as soon as Shana began her contractions in earnest, it all proved too much.

Kevin fainted, whacking his head on the bedpost.

The baby was born healthy and distinctly un-sheeplike. Shana was the prettiest, grubbiest mother in the district. And Kevin’s head, full as it was with birthing know-how, mended with only a small scar on his forehead.

The encounters with the hippies left me with an irrational but enduring disdain for their culture. In my embracement of Greek mythology, and in Kevin’s submergence into birthing science, Buddha, organic diets and sheep psychology, I had learned a lesson.

Too much knowledge can be a useless thing.”

(Excerpt from ‘Carry A Big Stick’, published by Hachette) 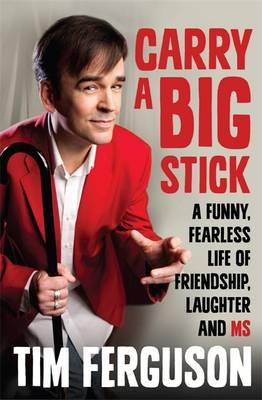 TO ORDER A COPY OF “CARRY A BIG STICK” – CLICK HERE