The driving force behind narrative comedy is character. Comedy deriving from character underpins many gag principles.

American playwright Neil Simon boasted that he wrote his comedies without ever writing one joke. Without starting a debate about his definition of a ‘joke’, Neil Simon’s comedies rely for their humour on the antics of his characters rather than straight-up, self-contained gags.

Often, a character has only to act in accordance with their nature to get a laugh. For example, David Brent in The Office is a character well-known for his hypocrisy.

When Brent discovers a pornographic picture with his face pasted onto one of the participants, he roundly condemns the pornographic images that have been discovered in the office.

This hypocritical behaviour is what the audience has come to expect from Brent and it provokes a cringing laugh. While the humour in this instance is a Comic Negation, there is no ‘gag’, no punchline or climax that culminates the negation. Instead, the entire scene is the joke, provoking laughter throughout. Brent acts in accordance with his nature.

It’s the phenomenon of Brent that makes us laugh more than any particular joke he unknowingly provides.

Character gags aren’t all at the expense of their subject. In many cases, characters we love exhibit benign qualities that provoke affectionate laughs. Clownish characters like ‘Chrissy’ in Three’s Company, ‘Victor Kozlowski’ in A.P.Bio, ‘Gary’ in VEEP and ‘Woody’ Boyd in Cheers are all over-endowed with friendly innocence. They are drawn from the ‘Idiot/Clown’ archetype, adults with a childlike view of the world, a contradiction that is bound to provoke laughter. They don’t need to provide a gag per se; their gullibility, naivety and general lack of life experience create the humour.

Benign qualities can cause as much trouble as malign ones. Clownish characters often fail to understand the jokes of others and misunderstand basic situations and concepts. (For example, when Woody first arrives at Cheers, he expects to meet his pen-pal, Coach, with whom he’s been exchanging pens.) Even such minor misunderstandings, although sweet, can lead to dire consequences.

All comic situations should arise from characters acting in accordance with their natures. Even characters temporarily acting against their natures will be comically undone by their permanent flaws.

Larry David (playing himself ) in Curb Your Enthusiasm is a deeply flawed comic character with a petty streak. In ‘The Corpse-Sniffing Dog’ (by Larry David), he quibbles over whether he should thank a male friend’s wife for the dinner that the friend paid for. But then Larry finds he needs to retrieve a dog he gave them lest the dog’s owner, after a complex turn of events, wreak a terrible revenge upon him. Larry visits his friend’s wife and pretends he’s apologetic for his pettiness.

He claims that he now sees he was wrong not to thank her for dinner, even though her husband earnt the money that paid for it.

Then he asks for the dog. The wife sees through his pretence, is appalled by his fraudulence and refuses to hand it over. Larry’s left in the lurch. Like Neil Simons’ plays, Curb Your Enthusiasm is relatively stand-alone-gag-free, relying instead upon Larry’s active-but-negative qualities.

A laugh can be generated when a character simply confirms by their actions a personal quality that the audience recognises. Eldin Bernecky in Murphy Brown is a renovator who arrives in the first episode and continues to renovate Murphy’s home throughout the series.

Once Eldin’s dithering work ethic is established, he gets a laugh by simply mentioning a renovation he did that ‘lasted a year—it was a nightmare’. Because we know Eldin, this innocent observation is funny. 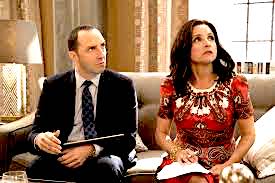 Characters’ shortcomings can drive stories that have the audience in stitches. Watching the stakes rise despite, or because of, a character’s frantic attempts to resolve their predicament is the force behind many a comic tale.

A well designed comic character, with well-chosen faults and blind spots, makes a strong launch pad for comedy. Sure control over who knows what when, and how characters react to the knowledge differential, can have us biting our nails with one hand and slapping our thigh with the other without ever hearing a witticism.

Lack of insight is where Comedy begins

Narrative comedy relies on the limited self-awareness and outlook of its characters. None of us are fully aware of our flaws, and when we do point out a clear fault in others, they may see it differently. A racist may know that their views are broadly unacceptable but they draw a lonely superiority from the fact, telling themselves, ‘I’m just saying what everyone knows is true, but doesn’t have the guts to say’. This lack of insight can get us into a world of trouble and that’s where comedy begins.

Characters who are aware of their faults are halfway to fixing them. Those who continuously stand back, see the big picture and make sensible choices have little place in comedy, unless they’re about to be hit by a bus or savaged by lions. Only when normally capable characters lose their way do they instigate comic hijinks.

Consider it a rule of thumb that if a character laughs at their situation, the audience doesn’t. And if they think they know something, they don’t know the half of it.