This is a laughing matter, seriously
by Liz Porter
August 23, 2011

A WINTER’S evening this year. Twenty students at RMIT University watch closely as their lecturer slides a DVD into the player in front of the classroom whiteboard.
Suddenly on screen it’s 1989. Three jackbooted young comics in black boleros are high-kicking their way around the set of long-defunct ABC comedy show, The Big Gig. The trio — Richard Fidler, Paul McDermott and Tim Ferguson — are a legendarily provocative musical comedy group, Doug Anthony All Stars, and they are bellowing the lyrics of their song Commies for Christ, with its chorus of “take Marx, take Christ, take drugs”.

“Your God is a nothing God, is a mealy-mouthed God, is a weak-assed God,” they sing. “My God is a really tough God, is a straight-line God . . . My God arm wrestled Kruschev, eats meat, farts with pride.” 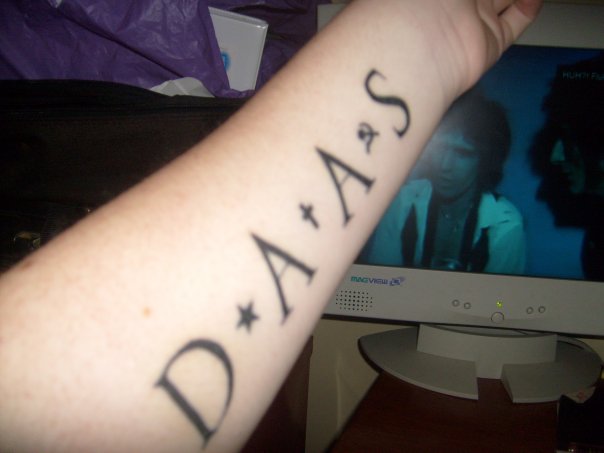 Ferguson, the lanky one, introduces himself as “Tall Tim”, leers into the cheering audience and sneers “Only one thing I want: your sex.”
Two decades later Tim Ferguson is the university lecturer now pausing the DVD to make a theoretical point about comedy for these students doing the Advanced Diploma of Screenwriting.

The author of The Cheeky Monkey, a textbook on the art of writing narrative comedy, he was the winner of RMIT’s Teacher of the Year for 2010 — beating a field of hundreds of sessional lecturers in science and humanities for the title.

Asked to explain what the satirist of 1989 would make of this unlikely step into academe, he adopts a voice full of twentysomething world-weariness. “Teachers?” he says. “They were ‘institutionalised monkeys’. And we all knew that ‘Those who can, do. Those who can’t, teach. And those who can’t teach, write a book on the subject’.”
He is now in his eighth year as a part-time lecturer in the university’s school of media and communications.

Last semester Ferguson taught the “write television comedy” unit. It’s a “nuts and bolts of comedy” course, one of nine electives, from which each student must choose three. Other choices include “write a feature screenplay” and “script and story edit television drama”.
This semester he is teaching “collaborate in a creative process” — one of the two-year diploma’s 22 units that each student must complete.
But tonight he’s here as a guest lecturer in his colleague Vin Hedger‘s “non-narrative comedy writing” unit, one that will finish with students pitching their comedy treatments to TV networks.

Hedger, a former stand-up turned comedy writer, with credits including Full Frontal and The Einstein Factor, explains that the networks take the RMIT students seriously, insisting they abandon their previous habit of submitting whole-class projects because of the potential contractual nightmares involved in signing them up.
First the students have to understand the traditions within which they are working. The topic for tonight is “late ’80s sketch comedy”. Hedger runs the students through The Eleventh Hour, and The Comedy Company.

Arriving at The Big Gig, he throws to Ferguson, who talks the students through the politics of staging an act that also involved holding machine guns (unloaded) to the head of an audience member, or grabbing a woman’s handbag and rifling through it on stage — and which, on TV, required the protection of a brave and powerful producer such as the ABC’s famous Ted Robinson.

“Strangely enough, we never set out to make people laugh,” he tells the class. “We were so angry. We thought: ‘What will give Australia the shits? Let’s do that.’ Our one shield of defence was Richard Fidler (now an ABC radio host). Richard was the nice guy and we needed our Harpo, so we would use him. Paul would always get angry. And my job was to look good . . . and agree with Paul.”

Hedger looks to the class. “People laughed, because they were feeling . . . What?”

Ferguson grins. “Anxiety, nervousness. There was a level of unpredictability . . . We tore a man’s pants off in one [show] . . . there was always the anticipation of something happening.”

Tonight’s class members are working on different projects across their course, many of which have nothing to do with sketch comedy — but they are all engrossed.
Joe Osborn, 24, has a degree in creative arts from Melbourne University. While he enjoyed the process of devising a sitcom in first semester, he hopes, eventually, to write feature films or TV drama. Across the table from him is Ingrid Elkner, 28, a graduate of RMIT’s diploma in professional writing and editing, and working on Rejects, an adult animated series “about a syphilitic sock monkey, a crusading lesbian doll, a depressive bear, and a born-again robo-kitty that live in an op shop”.
Like the others, she raves about Ferguson’s teaching talents, a view supported by the high demand for places in the class. 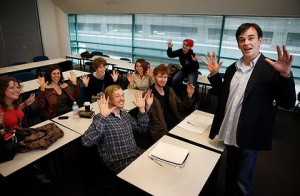 Ferguson now also runs regular masterclasses and short courses in both stand-up and writing. But his path into academia was a happy accident.
After DAAS folded, he remained a busy comedy practitioner. In 1995 he hosted the Channel Nine game show Don’t Forget Your Toothbrush and was then warehoused by the network, which cast him in a dozen different pilots while executives sought the vehicle that would make him “the new Graham Kennedy”.

Along the way Ferguson wrote a satiric novel, started his own production company and hosted and produced television shows, although his ability to deal with the rigours of performing was already compromised by the symptoms of multiple sclerosis, which he had been silently enduring for years.
He was finally propelled into teaching by a visit to the Australian Writers Guild‘s national screenwriters conference in 2003.

“I left outraged at the complete disregard screenwriters seemed to have for comedy and comedy writing in general,” he says.
“I was outraged on behalf of their children and their children’s children because it seemed to me that their writing could not work because they had no idea about the ‘other mask’ [besides tragedy] — the laughing one.

“I stewed on this for a long time, ranted, and drove a couple of friends mad.

“It baffled me why Australians, who live in the luckiest country in the world, could be obsessed with writing scripts that were little more than a succession of miserable and ghastly events, ending with one final miserable and ghastly event. Yet we all know that, as Aristotle said, a tragedy that won’t bear levity is preaching and a comedy that doesn’t bear serious examination is false wit. You need both masks to be operating.

“A series like Blackadder Goes Forth is repeatedly tragic; it’s set in the World War I trenches — everybody dies. On Golden Pond is a story which has us weeping. But only because we have spent the first half of the film laughing at Henry Fonda driving everybody gaga.” 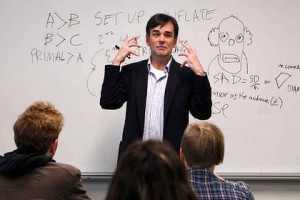 A writer/producer friend suggested Ferguson contact the RMIT screenwriting course. When he did, he received a job offer. Chris Anastassiades, then teaching comedy script writing, needed to leave to write Wog Boy 2: The Kings of Mykonos. Did Ferguson want to step in?
He did, even after realising serious work was involved.

“I only wanted to come in and have a rant, but I had to sit down and work out the information I was going to impart — as opposed to just spruiking comedy and high-fiving the students.”

The fledgling academic set about watching all sorts of comedy, including lots of sitcoms he didn’t like, just to see what made them work. The fruits of this labour eventually went into The Cheeky Monkey, published last year. 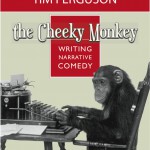 Ferguson is, of course, still “doing” as well as teaching. A planned feature film, co-written with Edwina Exton, about a bachelors and spinster ball, and a new stand-up show are two of his many comedy pots on the boil.

As a teacher he remains a man on a serious mission: to restore humour to its rightful place, both in film and television drama and as an essential part of all Australian university screenwriting courses.

Accordingly he is thrilled to be booked next year for two weekend teaching stints at Sydney’s Australian Film Television and Radio School.

“Sydney is the land of the thin book, read quickly,” he says. “Darlinghurst will be razed to the ground. The writers of that suburb will have to address my issue. If they don’t, I will have them removed.”