Article from The Age (Melbourne) by Tim Ferguson
Have you ever scoffed at an Aussie television drama? Have you complained that our dramas are aimed at the lowest common denominator; that anyone could write the senseless drivel that clogs the ducts of prime time TV? 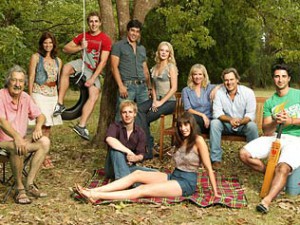 Here is your chance to prove your theories. Below is a step-by-step guide to devising your own Aussie TV drama.
To begin, find a quiet table in a trendy cafe. Get a coffee and settle in. This won’t take long. Pen ready?

Before you run, prove you can walk. Warm up by writing some “moronic waffle for the masses”. Piece of cake.

Every producer knows that even mind-numbing garbage requires careful planning. Here are the guidelines.

The cast should have six major characters. Typically, there are eight secondary characters. These can all be devised on the back of a napkin between macchiatos and chapters of Anna Karenina.

To keep things interesting, no character should be entirely saintly or utterly devilish. They must reflect humanity in all its complexity. We love “good guys” more if we can see their flaws. And Darth Vader’s wickedness was made more compelling because he was a nice bloke deep down, remember?

Discover where these qualities overlap or conflict. Repeat the process for the secondary characters. Repeat again for the entire cast. Order another macchiato. And more napkins.

To construct your first episode, whatever you do, don’t start with the first episode! The introduction of the characters and establishment of the setting add troublesome layers of complexity to the act of compelling story-telling.

Begin with episode three so your romances, rivalries and underlying sexual tensions are up and running (see napkin #1).

But not yet. First devise the “character arcs”. Like Noah, everyone in the series has to begin somewhere (wet) and end up somewhere else (dry). Each character will require a “series arc” – a journey of discovery, loss or reward that begins in episode one and ends in episode 22. They’ll each need 22 “episode arcs”, one for each week. For an entire series, that will mean 132 major character episode arcs. Some secondary characters won’t require series arcs. The “bloke who runs the pub” doesn’t change much. He’s there as a bouncing board for our stars. But let’s be clever and devise 176 secondary character episode arcs anyway. 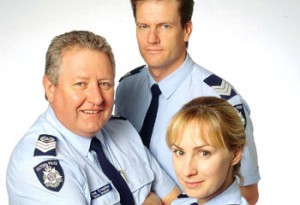 At this stage, it may be simpler to begin scribbling on the tablecloth.

Now you can begin writing the script. The first step is not to write the script. A storyline is needed. Storylines are typically five to eight pages (or two tablecloths) long. They briefly detail each scene and the overall events, arcs and themes of the episode.

The six characters should all have stories.

Each episode should comprise one major story (the A-story) and two to four minor stories (B-stories). Ideally, each story should help resolve the stories of other characters. For example, episode three’s A-story is about John’s need to get rid of his un-milkable cow. The B-story is about Janette’s desire for a pet to love. After various unsuccessful attempts, John finally gives Janette his cow. Janette is initially grateful but then realises it is not a pet she wants – she wants John.

For cohesiveness, the other four major characters should be in the mix. Maybe Bazza wants a non-milking cow to guard his chickens but is too proud to ask. When Janette declines the cow in favour of John, Bazza overcomes his pride and asks for the cow. Whereupon, Janette decides to accept the cow for the sake of endearing herself to John. And so on. 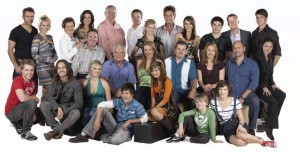 (It’s better if the cow does not become a major character. Cows don’t respond to direction and tend to stare at the camera. Besides, if the series has big name actors, there will be enough cows in the cast already.)

Next: “Scene arcs”. Each character in each scene should have an arc. Robert McKee, writer of the screenwriter’s bible, Story, calls these transitions “positive/negative”. Each character goes from one state to another in every scene – happy – sad, angry – humbled, loving – furious etc.

A typical cud-chewing episode of Aussie drama will have between 20 and 40 scenes. Unfortunately, that means another 20 to 240 scene arcs, depending on the number of people in each scene. Scene arcs are essential but, as you’re only creating a mindless piece of crap for the lowest commoners out there, you can keep the arcs simple. (Just be sure they overlap neatly, contain unexpected twists that conform with the charaters’ natures and build to a satisfying resolution.)

At this stage, you’d better order something to eat or the waiters will start throwing you daggers.

With the storyline as a guide, the actual script is the easy bit. Dialogue is a piece of cake. Keep it minimal. If it doesn’t serve the story, cut it. Where possible, characters should express their thoughts and emotions with action, not words. (This technique is probably employed for the shallow masses who can’t grasp conversations of any depth or length. Though, oddly, Stanley Kubrik and Francois Truffaut firmly believed in the principle.)

Keep each scene to two pages or less. Do not write what a character is the thinking – their thoughts should be apparent. Give all the A- and B- stories three acts (exposition, crisis, resolution) and resolve them in original and surprising ways.

Above all, keep it simple. Make the script accessible. Make the characters lovable. Leave no loose ends. Evoke emotions in the viewer. Where possible, provoke thoughts (even if they are obvious, cheesy, Epsilon Man thoughts). Create characters and stories that resonate with viewers’ own experience. Delight, disturb, titillate, sadden, amuse. The show must appeal to your mum, your spouse and your teenage niece.

You have six segments and 42 minutes of airtime to tie it all off in a neat little bow.

Bottom line: the viewers must enjoy it enough to watch again next week. And there must be at least 1.4 million of them.
That is the “formula”. If you complete a script, grab the tablecloth and run straight to the nearest drama executive.
If not, shut up, switch on the telly and enjoy the show.

Hopefully, those who moan at Aussie TV dramas may now have an inkling of the complexities involved in creating simple, appealing stories.
Even the blandest drama episode is the result of months of work by clever people. Australian drama writers strive hard to create stories and characters that do all of the above. They have hits and misses. They should be forgiven for both.

That is, unless you can do better.