The first step in a pitch is usually the ‘logline’, one or two sentences that sum up the show in a nutshell. This will give the listener a handle on the project and shows your understanding of the show’s basic elements.

A logline that is too long or complicated is immediately confusing, so try to boil your show down to a premise that presents the setting, main character/s and central conflict in a way that sparks the imagination.

HOW TO WRITE A LOGLINE 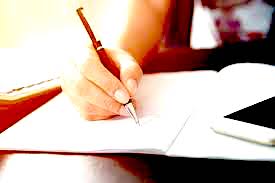 A logline describes your film in (ideally) 27 words maximum.

Too short, and your log line may lack vital elements to attract a producer.

Too long and it stops being a logline.

The intention is to interest and excite the reader, giving them a solid idea of the project.

The best description for your protagonist can be their role in life and an adjective that describes their most active and identifiable characteristic.

Usually, the names of your characters are not necessary in a logline. But sometimes, their names may suggest the world in which the story takes place especially sci-fi/adventure names (e.g., ‘Darth Vader’, ‘Prince Charming’).

2) What is their main goal?

There are basically two kinds of goal: External and Internal.

An External goal is something in their world.

Ideally, these two goals are linked or in conflict

3) Who or what is trying to stop them from achieving their goal? (Antagonist/ObstaIcle)

This may be an individual, a group, the entire world of the story, or a force (e.g., love, a stammer, fear of failure)

Elements you may include in your Logline (if they’re key to communicating the idea):

Another short document you might send in an email page is a short ‘Story outline’, 50-100 words That add a little more depth and detail to your still very brief explanation of your story…

HOW TO WRITE A STORY OUTLINE

For a narrative series or movie, add details of story, plot, characters, conflicts, stakes and perhaps the inciting incident.

For a TV show (i.e., gameshow, reality, lifestyle) add host info, target audience, a little formatting (what happens, when and why)

For a documentary, add details of the subject matter and your investigative intention.

Another document you can send to prospective team members or producers can be a ‘1-pager’, Utan one page (500 words maximum) document describing your story in linear order as it will appear on the screen. (E.g., The story of Back To The Future would be described as ‘Marty’ experiences the story)…

Typically, a 500-word document (approx. one page) that sets out your story.