The flipside to the hope principle relates to antagonists and is comprised of the following elements: a villain is impeded by a minor obstacle. He overreacts and is doubly punished as a result. 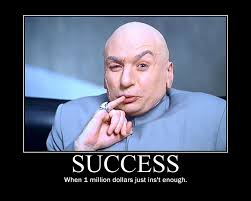 The no-hoper principle complies with the law of inverse significance: comic characters attribute vast importance to trivial things, and treat important things as trivial. When a comic villain is impeded only slightly, he reacts with all the force at his disposal. These characters never doubt that their bomb-to- kill-a-bug technique will succeed, even though, hidden in the bomb cloud, the bug frequently escapes to fight another day.

An example is the comic villain who slips on a freshly mopped floor. Rising to his feet, he notices a sign marked ‘Caution—slippery floor’. Angry, he kicks the sign, loses his balance and falls on his arse again—harder.

At any stage, the villain could stop, think and consider the risks. He could choose to tread carefully over the wet floor, wait for it to dry or avoid it entirely. But he’s a villain. Whether through self-importance, impatience, control- freakdom, anger management issues or any other evildoer shortcoming, the comic villain consistently defies and underestimates obstacles. This mindset is not based upon hope but upon ego. Comic villains cannot see their own deficiencies.

This principle can work in a broader narrative arc. The villainous Sheriff of Rottingham is frustrated when his wooing of Maid Marion is interrupted by Robin Hood. In the real world, the sheriff would get the girl easily. He’s rich, powerful, educated and handsome, while Robin is a penniless vagabond who lives in a tree.

However, instead of adopting a more personable demeanour that might attract Marion, the Sheriff overreacts. He tries to slaughter Robin and his Merry Men In Tights. Fool! He not only loses Marion, but his life (Robin Hood: Men In Tights).

Like the hope principle, the no-hoper principle tends to define the story- driving characters. Secondary antagonists tend to act with more moderation. A villain’s sidekick, for example, may advise caution. In Jay Roach and Mike Myers’ Goldmember, Number Two initially advises against Dr Evil’s scheme to produce sharks with lasers attached to their heads. As they are an endangered species he will have to make do with ill-tempered sea bass.

Because secondary antagonists tend to be more even-tempered they often escape the retribution visited upon their masters. Number Two never receives the punishment his master suffers. Perhaps his name is enough.

If your villain isn’t working, either in a scene or throughout the story, check them against the no-hoper principle. Your villain might be:

Despite this it should be clear that the villain is a credible threat and could with care and planning easily attain his goal. For example, Dr Evil in Austin Powers: International Man of Mystery (by Mike Myers) is a multi-millionaire with weapons of mass-destruction. Comic bad guys are undone as much by their personal flaws and limited world view as by the hapless protagonist.